GENERAL INTRODUCTION TO THE STUDY, PARTNERS, AND TIMELINE

The purpose of the Passaic-Bergen-Hudson Transit Project is to prepare a technical update and assessment for the restoration of passenger service along the New York, Susquehanna and Western Railway (NYS&W) between Hawthorne and Paterson in Passaic County and Hackensack in Bergen County. Additional analysis will address potential challenges and opportunities to extend service into Hudson County and connect to the Hudson-Bergen Light Rail (HBLR) in North Bergen. The project builds on previous efforts and considers the current conditions, a range of modal options, station locations, and the potential of transit friendly land uses along the corridor.

The project's initial steps include data collection and the establishment of project goals and objectives, followed by the development of a long list of alternatives that will include a range of modes and alignments. The project team will develop a methodology to screen the long list to determine a short list. The short list will be developed in more detail including concept engineering, operations, cost, and ridership analysis.

This process will ultimately determine the selection of an alternative that could be implemented to restore passenger service along the corridor.

The Passaic-Bergen-Hudson Transit Project Current Conditions Study began in Summer 2018 and is expected to be completed in the first half of 2021. The study is sponsored by NJ TRANSIT with input by Passaic, Bergen, and Hudson Counties. 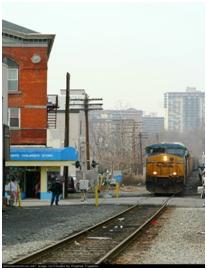 The proposed Passaic-Bergen passenger line was constructed in the early 1870s by the New Jersey Midland Railway, as part of a regional freight connection from Paterson to points north and west. In 1881, the Midland Railway merged with the NYS&W, and continued to provide freight and passenger service in the region. After World War II, passenger service along the NYS&W began to decline as increased automobile ownership and new road and highway construction siphoned passengers away from the railroad. In 1966, passenger service was terminated as ridership declined along the route and the financial loss of providing passenger service could no longer be sustained by freight revenues. Today, the line continues to host a modest amount of freight traffic.

Efforts to study the restoration of passenger rail service along the NYS&W were advanced in 1996 when NJ TRANSIT completed an environmental assessment. In 2002, NJ TRANSIT initiated an environmental impact statement (EIS) and preliminary engineering for restoration of passenger service between Hawthorne and Hackensack. Between 2007 and 2012, NJ TRANSIT completed the EIS and final design. Since 2012, changes in land uses, increased congestion, and the opportunity for economic growth have rekindled discussion about the provision of passenger rail service across Passaic and Bergen Counties.

GOALS & OBJECTIVES OF THIS STUDY

STUDY AREA MAP: The study area for the Passaic-Bergen-Hudson Transit Project includes seven municipalities in Passaic and Bergen Counties that are traversed by the New York, Susquehanna and Western Railway (NYS&W). In Passaic County, the municipalities include the Borough of Hawthorne and the City of Paterson. Bergen County jurisdictions include the Boroughs of Elmwood Park and Maywood, the Townships of Saddle Brook and Rochelle Park, and the City of Hackensack. A potential extension to connect with HBLR would add the Borough of Bogota and Village of Ridgefield Park in Bergen County, and the Township of North Bergen in Hudson County.

DOCUMENTS FROM THIS STUDY

Due to the ongoing COVID-19 pandemic, all in-person public outreach will be conducted virtually.